For those of you who have received this month's Freewheel you will have read I have acquired another P4, this time an ex-rally 90.
If you haven't read Freewheel then briefly, an advert for a rather sad looking P4 appeared on ebay at the end of the summer, apart from the car looking a bit shabby, the text was quite interesting mentioning a 'rally pedigree' and various extras having been added. 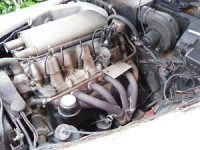 
As it was not far away I decided to go and have a look, and as a result found ORV 222, a 1958 Rover 90 that had been rallied extensively in the late 90s but had now fallen on hard times.

A standard 90 was acquired in about 1991 for classic rallying and as a result had had a number of things added to it. The list includes, a new chassis, a replacement 110 engine and transmission , a larger servo with added disc brakes, re-inforced brake hoses, new springs front ( lowered ) and rear as well as a heavy-duty roll bar and polycarbonate suspension bushes. A bespoke new six-branch manifold had been added with a smaller straight-through type exhaust box.

Anyway I decided that the car was worth saving and a deal was done and a few days later it was sitting in my garage, alongside my 1951 Cyclops and 1929 Coachbuilt 2 litre. I wasn't looking for a new project but it seemed like a good idea at the time. Picture taken mid-90s showing extra spot-lights and hi-intensity headlights, this rally number was for participation in the 1995 Monte carlo Rally, by the time it competed the large yellow spot had been replaced with a pair of Cibie spots which it stll carries today. The tyres are special radial snow-tyres.

Upon inspection the condition of the car became apparent, the chassis was OK as expected, but the rear body mountings had suffered from rust. It was however an interesting car and I decided to do my best to rescue it.

This is just the beginning of the story and I will try to keep the forum updated as and when progress is made. The aim of the project is to return ORV 222 to rallying prowess. This is the car on the RSR stand at Stoneleigh, October 2011. It shows the original roofrack that was with the car and a pair of radial snow-tyres on the roof. Serious looks at the lack of metal where the body should be.


First task is to get it through an MOT, which will mean fabricating some body mounts, which will entail removing the enlarged petrol tank (uses all the spare wheel space), rear valences and part of the rear inner wings to make new bits.

The following are some of the car's rallys and results I have been able to find.

More pictures and info to come. Thought it was about time I did an update.

In summer 2019 I was lucky enough to go to the Portugal P6 rally with Mark Gray, we drove his P6 from the Midlands to the rally in Portugal travelling through France and Spain on the way. The whole journey took 2 days non-stop and we covered just under 1500 miles.
During the time we were driving the chat got around to doing it again next year, and a gentlemen's bet was agreed that I would drive down to Portugal in the Rover 90, which at this time had been left alone in the corner of the garage for nearly 9 years.

In January 2020 I started to get the 90 ready, first was to see if it ran. A new set of plugs and points and some fresh petrol and a battery and away she went. Now I had to consider what was needed to make the long journey. First off was the state of the car, luckily it has a galvanised chassis, which was done after a rallying incident in the 90s which bent the original chassis. The owner at the time found a galvanised chassis which had been used as an exhibit and a swop was done. So sitting on a good chassis the body needed some attention. Most obvious was the rear body mountings, these had badly rusted and were not providing good support, luckily I had obtained a set of replacement ones a few years ago, so task one was to set about cleaning up the body and welding in the new ones. This highlighted the state of the boot floor and inner rear wheel arches, all of which needed repairing. Boot floor/filler before
The red is the galvanised chassis below I replaced the rear body mountings, removed the valences and spare wheel flap and repaired the boot floor and inner wheel arches. The car had been fitted with twin rally perol pumps which I also refitted, they were working fine, but the petrol reserve solenoid was not working and the breather pipe had become detached from the tank, so I decided to remove the petrol tank. On this rally car the tank has been modified for extra capacity so it now uses up the space where the spare wheel was, this about doubles the petrol storage. I dropped the tank, brazed on a new vent pipe and also took apart the solenoid valve. A simple repair soon had this working as normal. Replacing the tank, and its extra guard underneath was a little tricky, the worst bit being replacing the filler hose and breather pipe through the boot. 
The next attention was the brakes, they would lock on when used, inspection showed some well worn front calipers so as I had a new (refurbished) pair these were replaced with new pads and a new Girling servo added along with a new set of seals for the rear brakes. After fitting and bleeding the system was fine and the car now has some of the best brakes I have ever had on a P4. 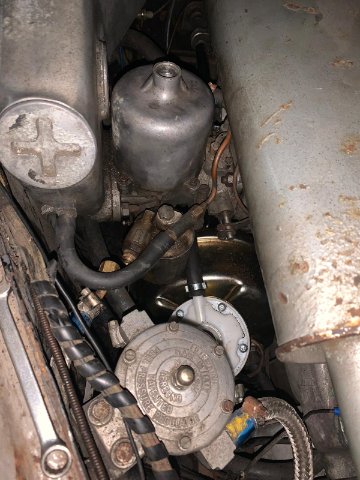 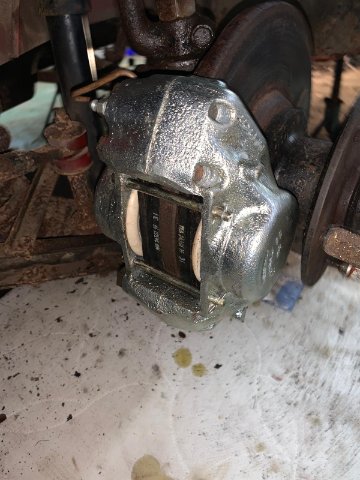 New caliper and pads (both sides)


Attention was now needed at the front of the car, expecting to have to travel through hot climes, the radiator was taken out and recored with a modern tri-core (3 rows of cooling tubes) and an electric pusher fan was added, the fan being removed, a new 80 degree thermostat and new hoses added. The engine will now run happily without the fan cutting in and when run with restricted air flow, simulated by blocking the grill, the fan keeps the temp in range. The exhaust was next for treatment, the existing one was held togther with patches and exhaust paste so to benefit the 6 port exhaust manifold fitted I build a 3 inch cherry bomb exhaust using parts from Rover 110 exhausts, this fits neatly into the chassis and gives a unobstructed clearance under the car.

That completed the main work required to return the old girl to the road and I was confident it would handle the trip to Portugal without problem, unfortunatley COVID-19 and the governemnt had other ideas so the trip was cancelled, I have howvere used the car for local events and runs and also dressed it up with some rallying extras and drove it over to the P4 meeting at Burghley House. The only problem is clutch judder which is a bit bad, I shall have to investigate the clutch plate soon. There is still plenty to do, the D posts need some repair and the door hinges need looking at, the drivers door does not like closing so I am exploring the option of re-pinning the hinges. I have also acquired an electric steering box and control unit from a Toyota prius with a view to adding power steering. I will let you know how I get on.
Paul Williams
1929 2litre Saloon
1947 P2 16HP
1951 Rover Cyclops
1974 P6 3500
1998 LR Discovery I
2002 75

As I am now putting this up for sale I have added a few more pictures with description of the condition it is in at the moment. 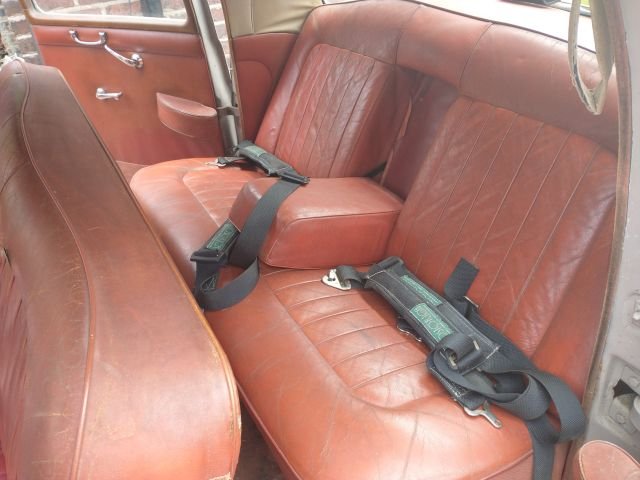 Near side is better but some repair is needed to wheel arch section. Return to “Rover P4, the next 75 and all the variations”