DMB 750 seems to have taken a long time to get sorted! It’s three years since I bought my 12 Saloon and started, what has become, a lengthy restoration. However, with the lock down lifted, I’ve been able to resume work on the old girl. Having fitted the engine ancillaries and filled the engine, box and axel with oil I have been able to start the car and drive it around the yard where I keep it. Having fitted a new clutch, I was keen to see if the dreadful juddering it used to have was cured or whether I’d have to lift the engine out again. Clearly this had to be decided before I refitted the front end body panels. As the wiring is out of the car it was necessary to rig up some temporary connections and it started first turn. Even better, the juddering is resolved so on with the body panels up front.
It’s a bit of a puzzle working out which bit goes where. The P1 was, by comparison, a lot simpler and probably a more robust structure with most bits bolting onto the chassis. The P2 was designed to have the front wings and rad etc assembled off the car and then put on as a single unit. All well and good in a workshop with plenty of space and strong lads about to help. I have elected to assemble it a bit at a time, starting with the rad shell and running boards. The inner and outer wings bolted together and then that slotted into place.
So far, I’ve left all the nuts and bolts finger tight at most until I’ve got both sides done and I can see if there are any alignment challenges to resolve. One question I have is where should wing piping be fitted? There was none on the car when I bought it as the wings had been off and cobbled up following bouts of rust fixing and the odd accidental bump. My thinking is that there must be some between the inner and outer wing top edge and then down the back between body and wing. If anyone can advise that would be helpful. I was hoping to get to Roverfest this year and study some other cars before reassembling mine, but that hasn’t been possible and I need to get moving.
My car was the usual black with brown interior; both in a pretty sorry state. It seems that grey cars are in vogue at present so I went for ‘light aircraft grey’ with red leather seats and door trim, which have yet to be fitted. If I can get the body into one piece over the next week or so, it will be wiring and then headlining, carpets and seats. Plenty to do but should be a pretty little car eventually. 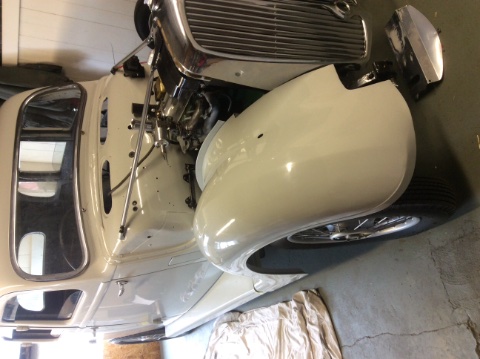 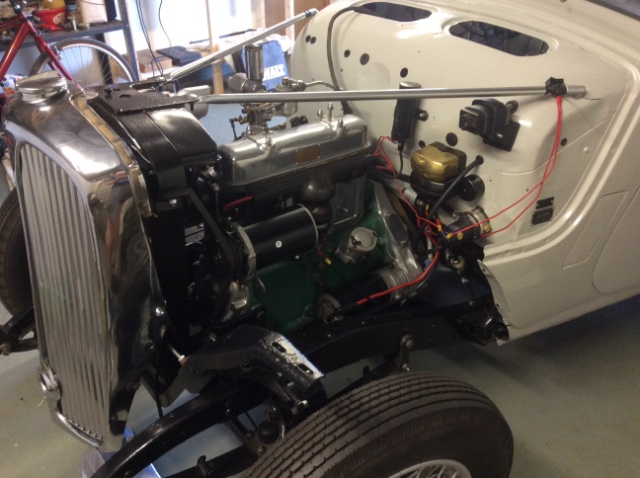 Your car looks amazing. It's quite inspiring to see what can be done. Good luck with the next steps.

Its looking good Tony.
I wish I had sussed that the wings and radiator were designed to be assembled off the car and fitted as one. When I took the radiator surround off mine (to get a copper fuel line in place) I left the wings in place and had a devil of a job getting the bolts to line up and also getting at the lower ones when I refitted the valance/deflector (previously absent) which goes between the radiator and the grille blocking access to the bolts. I then tried to adjust the height of the wings to stop them clashing with the ends of the front bumper which was not very successful because even at full adjustment there was not enough clearance. In the end I removed the inner spacer on the adjustor bolts to get more adjustment but even then the result was not great.
The general outcome was that the radiator seems to be slightly twisted and this makes getting even gaps around bonnet impossible. It sounds like I will have to remove the wings and radiator and the bonnet etc etc and start again some time
Rob
Top

Thanks for your positive responses. It looks better in the pics than in real life but, having looked at it for so long, I see all the faults.

I've put the other wing on since taking these pictures but I still have the piping to sort out before doing everything up right. I've got the running boards off again to fit new rubber on the tops. I'm going to cover them in sheet rubber matting and hope it looks ok. I can always fit proper ones later if they don't look right. I'm trying to conserve cash to get a stainless exhaust made. With luck that will be the last major expense needed to get this P2 on the road.

Unfortunately, the fuel pump was too close to the inner wing and I shall have to re think it’s location. This is annoying because the fuel pipe has been cut to length and the in line filter put in place. Hopefully, it will be a simple matter of extending the rubber fuel pipe from the filter and relocating the pump closer to the engine. It was a real fiddle to run the pipe along the near side chassis and get it across the tank to feed via the original route into the top. In the end I formed a pipe from the top of the tank around the off side to the front and then joined it to the original brass pipe, now running down the opposite side. Access to the join is from under the rear seat and tank removal is not compromised. The whole point of moving the pipe was to get it away from the exhaust and remove any warming of the fuel and, hopefully, reduce the possibility of vaporisation. Probably makes little difference but I did the same with the Tourer and have never had a problem. However, that was easier because the tank lays flat so it’s just a matter of running the pipe from the other side.

Your 37 12 looks as though it is going to be very smart when finished.

Re your couple of queries re wing piping etc and can suggest the following which may or may not be new to you.
For the P2's 1937 to 47 piping flange is between the body and scuttle-where the slotted holes are to attach rear of wings to body unit. From the picture of the car it appears to be 37 model with the one piece l shaped bonnet panels that swing down.( and the cutout to clear the headlamps?) The metal up-stand around top of wings suggest this. As against the 38 models on-wards where there is the fixed side panel ( with wing nut to remove) and just the two top halves of the bonnet. On these models the piping tube and flange sits on top of the wing where the side panel slides down on top of wing, and there is twin beaded bonnet tape on top of the piping flange which the edge of the side panel buts up against. The wing piping and tape is held in place on top curved surface of wing with say No 4 pan headed slotted self taping screws. The leading edge of piping naturally has the flange sandwiched between rad shell and valance panel of wing. Flange of wing piping cut here to allow this.
With your 37 model is it not the case that flange of piping is sandwiched between the upstand and inner wing valence.

Of course getting the wing / radiator/bonnet top panels all aligned up can be a headache, as Rob Homewood has mentioned, but certainly you would need the bonnet in place to get the wings right. Thankfully the Rovers have the large diameter rad stay tubes with left and right hand thread to help here.

Your query re final paint colours! As you may know Rovers of the thirties with a grey body would have a blue interior, or blue body with a blue interior.
If your interior already done in red (maroon?) the correct Rover colour-per the catalogues would be with maroon paintwork.

Many thanks for the detailed reply. I’ve already put most of the piping in and, glad to report that I got it almost correct, based on your information. However, I think I shall need to order some more to address the bits I got wrong!

Part of the challenge is getting all the bits back into the right places and, even though it’s only three years since I took it apart, there are a few areas I cannot recall plus I don’t think it was necessarily right before.

Regarding my colour choices; these were partly determined by cost. The car was in a sorry state and required a bare metal re spray and the seats were completely past recovery. Even after several weeks of applying hide food etc, there was little improvement. The problem with these cars is that, even restored, they do not command a high enough market value to justify massive expense. My solution was to paint it myself and have the seats re trimmed in leather by someone I know that works on new cars. He works in Italian leather but the colours available generally looked too modern and so I played safe a had the same colour as he used to do my Tourer. For the outside, I didn’t fancy painting a dark colour and I don’t like black cars anyway, so I settled on grey after my son produced a number of renderings in different colours for me to select from (he is a car designer with Aston Martin).

The end result won’t be a truly original specification car but I do believe it will be a faithful representation of the model and, together with the mechanical work that has been completed, will ensure that DMB 750 is in a decent condition to wave the Rover flag for many years to come.