I am currently replacing my 39 DHC stepboards with ones that fit properly and I am wondering about the colour of the valance- the trim along the outside edge of the stepboard which fixes the rubber and carries the chrome strip etc. Mine is currently black (with no chrome strip) but I suspect it should be the body colour (in this case grey). I have tried to check this on as many photos as I have but on most darker colour P2's it is impossible to tell. I have only seen a couple of white P2's which do have white valances and of course all original illustrations were in black and white only. Can anyone confirm for me please?
Top

Yes Rob, they should be body colour.

When I did the running boards on my P2 i found that the side edge piece had been replaced with a parallel section about 20mm deep and the whole thing covered in rubber. It looked a bit clumsy and had to be sorted. However, as far as I could deduce from looking at pictures of other cars, the side edge piece is wider at the front than the rear so that the bottom edge is at an angle to the chrome strip, diminishing to nothing at the rear. As Mike says, this piece is body coloured. Making this piece proved quite a challenge and I ended up using a strip of angle aluminium and shaping the side. Once painted, it gave the desired effect as you can see from the pictures I recently posted of my car.
You must post a picture or two of your car. It would be great to see it.

Hi Tony
Slow progress at the moment painting up the new stepboards with plenty of protective layers and I took a day out today to visit the North coast to meet friends in her, still with the old boards. It seemed like it was going to be the last decent day of the summer. But hopefully I will have something finished to photograph fairly soon. The valances are, as you say, tapered and I dont know why the previous owner never put the chrome strips back on but went to all the trouble of filling all the holes with fibreglass and painting over them probably around the 1970's. But the rubber is pretty perished and I thought rather than put new rubber on the wrong boards (they are the shape for a saloon) I would get the right shaped ones to close that annoying gap to the bodywork. A bit of a shame because the old stepboards are in good condition but I guess I can sell them on,
Rob
Top

It will be good to see your car once you have it ship shape with new boards etc. Back in 70s as I recall, with regard to my Tourer when my Father owned it, old Rovers - even soft tops - were not regarded as much more than quaint old bangers. As such, the value was low and parts supply quite poor. Certainly not worth spending a lot of money on. Bits of trim, like your chrome strips, were probably rusted and viewed as an unnecessary expense to replace and left off in an effort to keep the car looking tidy.
I look back at some of the near criminal acts that my dear old Dad perpetrated on TL 6200 in the 60s and 70s like removing the bumpers because they were rusty and taking a hack saw to the almost unique rear bumper irons. Not to mention discarding the twin carb manifolds and fitting a standard Saloon single carb in it’s place as he couldn’t get it to run properly! However, he did keep the old car going and stored under cover when it would have been so easy to sell it on for a few pounds, So the fact that these lovely old motors survived is very much down to the care of owners during times when old cars were unfashionable and we must be thankful to them even if some of their efforts were a little misguided! That said, I committed the greatest sin in the 80s by stripping the car to restore and then leaving it in boxes for 35 years. It could so easily have been sold off as parts as, I’m sure, many others have been.

TonyG asked if I would post some pics of my stepboards and I have just finished the offside one after various interruptions and delays etc. I am pleased to get it done but I found the front wing would not align properly wth the stepboard no matter what I did. I suspect that one of the supprt brackets may be distorted or the front wing itself. So I am not totally satisfied with the end result but decided to live with it as my struggles under the car with a crow bar were doing my back in. The other thing which was outside my control was the fact that the radius of the stepboard did not match the moulded rubber lip of the cover and the rubber resisted reshaping.
Still it is now a complete stepboard with no gap to the bodywork which looks much better than before.
regards
Rob 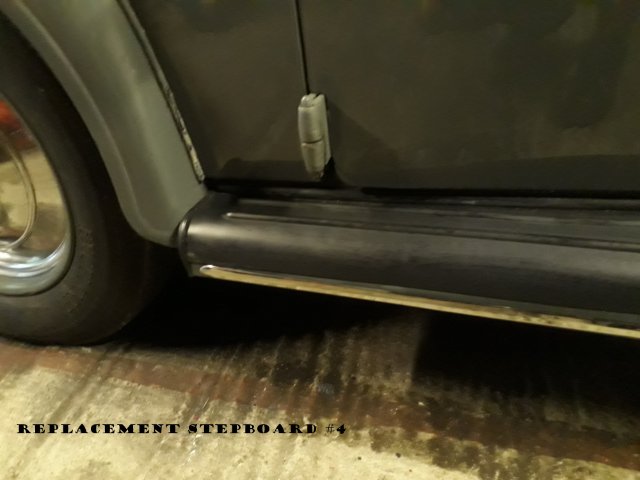 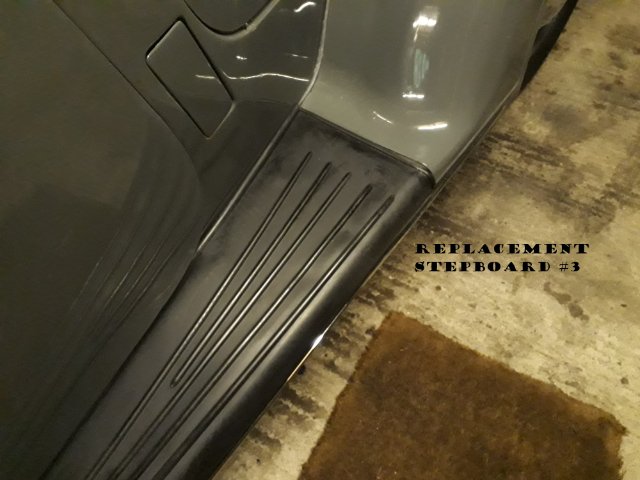 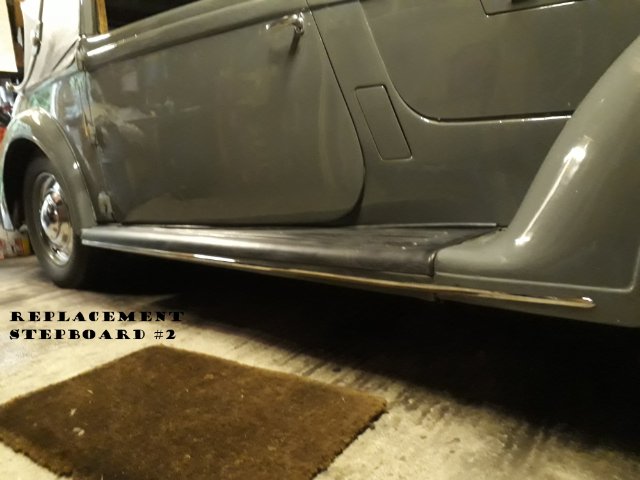 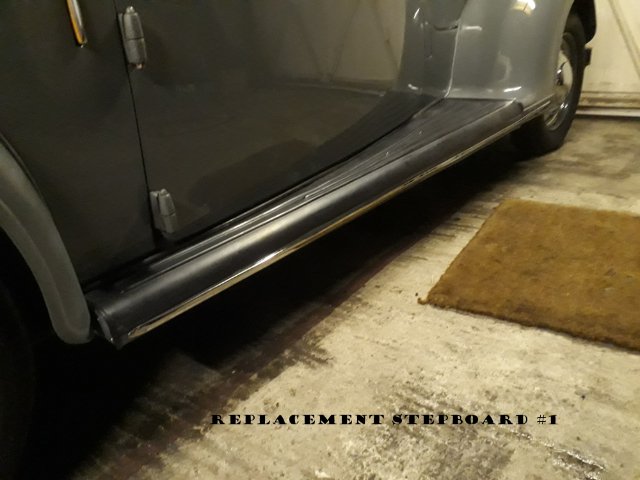 Thanks for posting these pictures. It’s all looking pretty good to me and seeing your lovely car is encouraging me to get on with jobs left to do to my P2 Saloon. I went through the pictures before reading your post and had to go back to them to see what you meant about alignment, so it’s probably only you who will notice it! I know that when I fitted my wings and step boards it was a matter of getting the best fit, rather than a perfect fit as a number of things have changed since the car was first built, i.e new sills, repaired wing bottoms and replaced support brackets. I found the best compromise was achieved by loosening the board support bolts and the wing bolts into the bulkhead, then bolting the step board to the wing before tightening every thing else back up. Of course, this was an easy option for me because I was fitting the wings, grill etc at the same time plus all the bolts were new and presented less of a challenge.
However, that said, one has to wonder just how well the cars were assembled in the first place? Yours was probably done with more care than mine, given that it was coach built, although that also means that the craftsmen involved had the latitude to modify slightly to get best results which is fine until a part needs replacing. Fast forward 30 years to the 1970s and I clearly recall the best school trip ever to Ford at Dagenham with Mk3 Cortinas and Mk1 Granadas on the production line. The shell with fitted doors, boot and bonnet went into a section where some guys with lengths of wood and shaped bars wrenched the opening panels about to get a good fit, which explains why a door off one never quite fitted another car! I expect Rovers were made much the same way back in 30s and 40s and I know that I’ve found some very old and curious packing pieces during my Saloon restoration. We like to think our old cars were made to high standards but they were pretty poor in many ways compared to a modern computer designed and robot built vehicle. For example, I was disappointed to discover that the drain pipe from the sunroof on my P2 runs inside the A pillar and ends within the sill, rusting the unpainted interior once the drain holes have, inevitably, blocked. Austin 1100s were the same with water from the heater inlet grill so no lessons learned in 30 years! Also, and worse still, the rubber drain pipes from the opening screen on my P2 are very short and exit into the A pillar leaving the water to run down inside and find a way out.
All modified now but the point we must all remember is that these cars were never perfect, just better than some others at the time and that’s what we are all trying for now. Your car looks great and I’m looking forward to seeing it sometime once we are allowed out to play again.